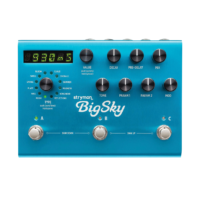 A reverb pedal can be one of the most transformative boxes on your board. Dan Orkin from Reverb.com picks out the 10 most popular units on the online gear marketplace…
Welcome back to our ongoing series of articles that showcase the top-selling pedals from different categories on Reverb.com. As the world’s largest music gear marketplace, we see thousands of pedals sell on our site every week, and these rankings reflect the best-selling models across new and used pedals sales from all over the world. So far in this series, we’ve covered the 10 best-selling overdrive and delay pedals. Today, we’re fixing our sights on the wide realm of reverb.
While historically, reverb has been seen as the domain of amps (think the onboard spring circuit of a 60s Fender Twin Reverb, for instance) the evolution and availability of digital processing has ushered in an age where there are many hundreds of different reverb pedals to choose from on today’s market. From do-it-all emulators such as the top-ranked TC Electronic Hall of Fame to combination delay-reverbs including the EarthQuaker Devices Avalanche Run, there are several key reverb genres available to today’s guitarists. Hopefully, this list will help you find which type is right for you.
Seen something you need to add to your pedalboard? Head to Reverb.com and pick one up for yourself!1. TC Electronic Hall Of Fame
Now in its second iteration, the Hall Of Fame from TC Electronic continues its reign as a best-in-class all-rounder. This pedal can tackle just about any type of reverb you can imagine – or download via TonePrint – in an affordable and readily available package.2. Electro-Harmonix Holy Grail
While somewhat less versatile than other entries on the list, the Holy Grail (most commonly found in a smaller ‘nano’ enclosure) is known for its classic tone across three modes. If you’re interested in just a base coat of spacey tone, the Holy Grail is a great choice.3. Strymon BigSky
One of Strymon’s big box pedals, the BigSky can tackle just about any form of Reverb you can imagine. The BigSky was introduced as an updated and expanded follow up to the BlueSky (see below), but with newly designed reverb algorithms that rival the sound quality you’d find from rack units in professional recording studios.4. Strymon BlueSky
Like its big brother mentioned above, the BlueSky from Strymon can generate a nearly endless array of highly customisable reverb effects, but with a more space-conscious enclosure. There a ton of bells and whistles under-the-hood to satisfy even the most demanding live or studio deployments, too.5. TC Electronic Hall of Fame Mini
The Mini version of the Hall of Fame features many of the same reverb algorithms as its full-size counterpart, but differs in that its parameters can be only tweaked via TC Electronic’s clever TonePrint smartphone app. While not ideal for those who like to change settings on the fly, it’s a convenient options for any player that really only needs one reverb setting in their chain.6. Strymon Flint
A combination digital pedal from Strymon, the Flint is something like a classic Fender amp in a box, in that it offers both reverb and tremolo effects. The reverb channel has a toggle for 60s, 70s, and 80s modes, which contour the sound to match the prevailing tones of each decade.7. EarthQuaker Devices Avalanche Run
The first digital pedal from the widely admired and always innovative EarthQuaker Devices, the Avalanche Run is a combination stereo delay and reverb that’s oriented towards experimental players. If you like creating and getting lost in strange soundscapes, this is a great pedal to add to your board.8. Boss RV-6
The heir to the ubiquitous RV-5, the updated RV-6 has finally surpassed its predecessor on the sales rankings. This updated pedal ups the reverb mode count to a total of eight flexible options.9. DigiTech Polara
Part of a new wave of compact pedals from DigiTech, the Polara reverb is like several other entries on the list in that it offers a range of different modes that will cover most reverb needs. The Polara also includes a reverse reverb mode – a key asset for any aspiring shoegazer.10. Boss RV-3
Despite being out of production for over 15 years, the Boss RV-3 continues to sell strongly on the used pedal market. This was one of the first combination reverb/delay pedals, a format that has come back into prominence over the past few years.10. Boss DD-3 Digital Delay
As is the case with many Boss compact pedals, the DD-3 helped define the very concept of a digital delay stompbox. In production since 1986, there are a tonne of used DD-3s floating around on Reverb, so they are easy to find and relatively cheap. They sound great, too.

The post The Reverb Top 10: Reverb Pedals appeared first on The Guitar Magazine.