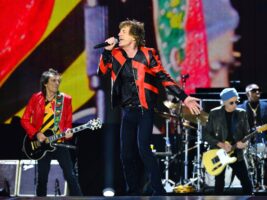 The Rolling Stones play The Beatles in first Liverpool since 1971: “We decided to do a cover of a song written by some local lads”

The Rolling Stones paid tribute to the Beatles yesterday (9 June) whilst performing in the fab four’s home city of Liverpool for the first time since 1971.

Jagger initially suggested earlier in their set that the band perform a rendition of You’ll Never Walk Alone, the anthem of the Liverpool football club.
However, the Stones decided to change things up by covering I Wanna Be Your Man from 1963’s With The Beatles.
“We decided instead to do a cover of a song written by some other local lads,” Jagger told the audience. “So we’re doing this especially for you Liverpool, okay?”
Watch the performance, courtesy of YouTuber Matt Lee.

The song has a special place in the Stones-Beatles canon; the Stones were the first to record and release the Lennon-McCartney in November 1963 to commercial success, before Ringo sang on the Beatles edition of the song, which came out just a month after.
In a 2014 interview with Rolling Stone magazine, Paul McCartney spoke more of ‘gifting’ the song to the Stones.
“We were friends with them, and I just thought I Wanna Be Your Man would be good for them,” McCartney said. “I knew they did Bo Diddley stuff. And they made a good job of it. And I like to show off, say we gave them their first hit. And we did.”
The post The Rolling Stones play The Beatles in first Liverpool since 1971: “We decided to do a cover of a song written by some local lads” appeared first on Guitar.com | All Things Guitar.