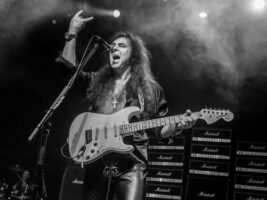 Yngwie Malmsteen on growing up in Sweden as a musician: “You were told you’re nothing… to shut the fuck up and stay in line. It was like socialist fascism”

Yngwie Malmsteen has recalled growing up in Sweden in the 1970s and the conservative attitudes that he faced to artistic ambitions, comparing them rather unfavourably to his experience when he moved to America.

Speaking to guitarist Cory Wong on his Wong Notes podcast, Malmsteen was asked about Sweden’s history of pop music, all the way from ABBA to Max Martin, and if there was anything particular about the country that connects it to music.
However, Malmsteen stated that in his experience, the music industry of 1970s and 80s Sweden wasn’t taking notice of many trends, especially not his own music. “No one in Sweden wanted anything to do with me. As far as rock and roll or metal, there was nothing. Not one other band around.
“In 1982, they had a big battle of the bands, and at the same time – that’s when I got offered to come to the United States. And when I did, I immediately started recording, and did three albums in one year. That’s a huge thing! So all of a sudden, in Sweden, they thought: ‘wow, this kid actually did it.’ And then there was this other rock and roll band that got popular soon after… so I would say that it was 1984, 1985 – then the industry started to take notice.”
Part of the reason for this disinterest in rock, it seemed to Malmsteen, was a prevailing conformist attitude. “When I lived [in Sweden] in the late 70s, early 80s, if you had long hair it was like: ‘oh, get a job! That’s not a real job!’, you know? It was very bad. When I came to America, the first thing I noticed was the attitude – or the lack thereof. People of any age, they go like ‘hey, are you in a band?’ or something like that. In Sweden, they would go, ‘hey! Get a job, you drug addict!’”
Malmsteen then compared the attitudes instilled by the American education system, compared to the Swedish education system. “[In America] the little kids sits in school, and it’s like ‘hey Johnny, when you grow up you can work, you can have anything you want. You can be president of the United States!’ – that encouragement. Anything is possible. You Americans take this for granted! In Sweden, when I grew up you were basically told: ‘you’re nothing, you can never do anything, conform, be exactly what I tell you to be… shut the fuck up and stay in line. It was like, socialist fascism: absolutely horrendous environment for a free-thinking artistic person, like me.”
So, Malmsteen surmises that his perspective on the golden age of Swedish pop music is limited: “that all happened after I left. When I was there, it was a desert, musically.”
You can hear Malmsteen’s full interview on Wong’s Wong Notes podcast.
The post Yngwie Malmsteen on growing up in Sweden as a musician: “You were told you’re nothing… to shut the fuck up and stay in line. It was like socialist fascism” appeared first on Guitar.com | All Things Guitar.