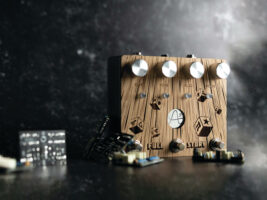 Anasonds introduces the Full Story, a modular exploration of the Big Muff’s history

Anasounds has introduced the Full Story, a modular fuzz pedal that aims to offer a comprehensive history of Big Muff fuzzes, from the Triangle to the Pi to the Green Russian and more.

READ MORE: “As a nerd, I think I spent more time learning about gear than learning how to play well”: Anasounds’ Alexander Ernandez

The pedal’s core tones are derived from a set of seven “tone cards” – these are modular additions to the pedals’ circuit, each of them modelled after a different version of the Big Muff fuzz pedal: the Triangle, Ram’s Head, Pi, Op-Amp, Civil War, Green Russian and Black Russian.
The cards are inserted into the pedal with a keyed connector (meaning you can’t accidentally install them backwards). Two tone cards can be used at any time, each independently switchable with the left and central foootswitches. When both are engaged, the two fuzzes work in series. Each fuzz has independent controls for volume, tone and gain: the primary (central) fuzz is controlled by the larger knobs, while the secondary (left) fuzz is controlled by the smaller backlit knobs.
Image: Anasounds
In addition to the two fuzz channels, the rightmost footswitch activates an old-school germanium treble-booster circuit, which can work in four different frequency response modes. This boost module is also modular, and Anasounds hints that it might release an upgrade module in the future.
The input stage also includes a pickup simulator, meaning that impedance issues with buffered pedals beforehand will not affect the more sensitive parts of the pedal, such as the germanium boost.

The pedal arrives first in a Collectors Edition, limited to 250 units. This edition includes all seven tone cards, as well as a bespoke box to keep them in. It’s available to preorder now, and is set to ship in August. Until July, the pedal lists for a discounted €399 – after that, it will list for €499.
Find out more and preorder over at anasounds.com.
The post Anasonds introduces the Full Story, a modular exploration of the Big Muff’s history appeared first on Guitar.com | All Things Guitar.