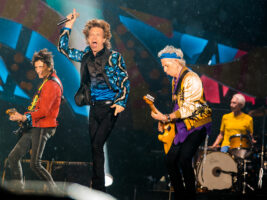 The Rolling Stones reflect on the “huge loss” of Charlie Watts: “He was the rock the rest of it was built around”

In their first interview since the passing of Charlie Watts, members of the Rolling Stones reflected on the late drummer’s legacy, calling his passing a “huge loss” for the band.

The Stones played their first show without Watts holding the beat at a private event on Monday (20 September), marking touring drummer Steve Jordan’s debut with the band.
Speaking to Rolling Stone, Jagger underlined Watts’ importance to the group’s dynamic: “He held the band together for so long, musically, because he was the rock the rest of it was built around.”
“The thing he brought was this beautiful sense of swing and swerve that most bands wish they could have,” Jagger said. “He was always there, always played beautifully and was always willing to discuss what to do about it – how he could make it better.”
The Stones are set to kick off their 13-date No Filter tour this Sunday (26 September) in St. Louis. Whether the band will continue to tour after the trek is still up in the air. “I mean, anything could happen,” Jagger said.
“If things are good next year and everyone’s feeling good about touring, I’m sure we’ll do shows,” he continued. “I’m just trying to concentrate on this tour now.”
Guitarist Keith Richards said he had been working with Jordan since July, when the plan was to have him as a temporary drummer while Watts recovered from a medical procedure.
“Steve brings with him a lot of knowledge about the Stones,” Richards said. “He’ll say, ‘No, Charlie plays like this.’ Steve is so meticulous, so aware of the seat he’s sitting in. Steve said this to me: Charlie played the drums. He didn’t hit them.”
Guitarist Ronnie Wood added: “There’s an energy that Charlie projected through his sticks, but Steve projects it physically as well. Whereas Charlie sat dead still, Steve is moving, and so is the whole drum podium. You can see the satisfaction on Keith’s face, on Mick’s face.”
The post The Rolling Stones reflect on the “huge loss” of Charlie Watts: “He was the rock the rest of it was built around” appeared first on Guitar.com | All Things Guitar.