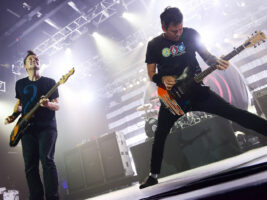 Tom DeLonge says his friendship with Mark Hoppus has been “completely repaired” since he learned of his former Blink-182 bandmate’s cancer diagnosis.

Hoppus confirmed his cancer diagnosis in June when he was already undergoing chemotherapy for stage four diffuse large B-cell lymphoma. Hoppus has completed chemotherapy, and in his latest social media update (21 September), shared that his hair has started growing again.
Speaking to Zane Lowe in a recent interview for Apple Music, DeLonge revealed how he first learned of his former bandmate’s diagnosis.
“The way the universe works is strange because I reached out to Mark because I needed him to sign this piece of paper that had to do with my divorce,” DeLonge said. “Only because of that call did I learn he had cancer. And he told me on the phone. I was like, ‘Wait, what?’”
DeLonge left Blink-182 in 2015 when he decided to devote more time to his aerospace-entertainment company To The Stars. In his place, the band enlisted Alkaline Trio vocalist-guitarist Matt Skiba. DeLonge and Hoppus did not speak regularly back then.
“We weren’t really talking much at all, maybe once every couple of months. A little text here and there,” DeLonge explained. “But now, we talk multiple times a day. So it’s like we’ve been able to completely repair that friendship and really cut to the depth of who we are as people and what this is all about.
“And he’s had a really difficult time, but he’s doing really good right now, in the sense of where the cancer is gone, as far as we know, and the chemo worked really well.”
The post Tom DeLonge says he’s “completely repaired” his friendship with former Blink-182 bandmate Mark Hoppus appeared first on Guitar.com | All Things Guitar.