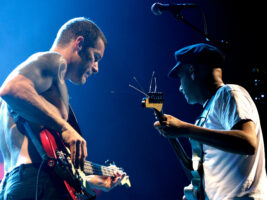 UK music fans have chosen Rage Against The Machine’s Killing In The Name as their all-time favourite Christmas Number One.

READ MORE: Tom Morello: right-wing terrorists “have co-opted the idea of standing against the Man”

A new poll, organised by the UK’s Official Charts in collaboration with Nine Eight books, asked the public to choose their favourite through a series of heats. After the semi-finals, two tracks remained: Killing In The Name, and The Spice Girls’ 2 Become 1.
The poll chose the former, although it was close: 48.7 per cent voted for The Spice Girls, and 51.3 per cent voted for Rage Against The Machine.

Just two songs remain in the battle for the Nation’s favourite #XmasNo1 with @nineeightbooks! https://t.co/msaFjGDh88
1996: 2 Become 1 – @spicegirls2009: Killing In The Name – @RATM
Who will be celebrating an extra merry Christmas?Vote now
— Official Charts (@officialcharts) December 15, 2021

The track was number one in the UK charts on 20 December 2009. This followed a campaign organised by English DJ John Morter and his wife Tracy, which aimed to topple the reign of The X Factor – a single from the reality TV show had claimed the Christmas Number One spot for four consecutive years. The campaign drew criticism from X Factor perpetrator Simon Cowell, who called it “cynical”, and implied it was aimed directly at him.
John Morter told NME at the time: “​​We’ve nothing personal against [Cowell] at all, we just do not want yet another Christmas chart-topper from that show again.”
Right now, the race for the Christmas number one is heating up. Leading the charge is a track called Sausage Rolls For Everyone by LadBaby, Ed Sheeran and Elton John. We’ve also been given a dose of Christmas anarchy this year, albeit with a more UK-centric political message. The Kunts’ track Boris Johnson Is A F****** C**t has entered the week’s charts at number five.
The post The UK chooses Rage Against The Machine’s Killing In The Name as its favourite Christmas Number One appeared first on Guitar.com | All Things Guitar.