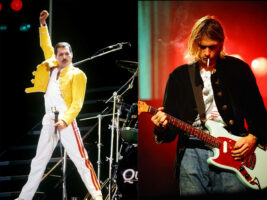 YouTuber and producer Rick Beato has counted down the only songs over 30-years-old with one billion streams on Spotify in a new video, and pretty much all of them wouldn’t exist without guitars.

READ MORE: Dave Mustaine says he was “dumb” to punch James Hetfield when he was in Metallica

Spotfify has over 300 songs that have reached over one billion streams, but only 17 of them are over 30 years old. The platform’s most streamed song ever is Ed Sheeran’s pop-hit Shape Of You, at 3.23 billion plays and the oldest song on the countdown of tracks older than 30 is also the one with the most streams – Queen’s iconic 1975 hit Bohemian Rhapsody, which has amassed a total of 1.97 billion plays so far.
All aside from A-Ha’s Take On Me which is more synth-based (although there’s still some guitar action in the background) are all reliant on distorted guitars or funked-up bass. Check out the full list here:

If you fancy watching Beato’s full video countdown you can do so below:

The rise in streaming services and the vinyl revival have had a huge impact on the music industry, and in particular continuing the legacy and love of many iconic tracks from the 90s, 80s and beyond.
The impact of pop culture has also seen a boom in popularity for artists such as Kate Bush and Metallica (thanks, Stranger Things!) but also the use of TikTok has younger generations finding classics such as Earth Wind and Fire’s Let’s Groove and Fleetwood Mac’s Dreams. Even Def Leppard and Mötley Crüe’s recent stadium tour has reportedly made a profit of $173.5 million in ticket sales meaning the circuit is now the biggest tour of either band’s career, proving that people still love the classics.
The post These classic songs with over one billion streams on Spotify are fuelled by guitars appeared first on Guitar.com | All Things Guitar.