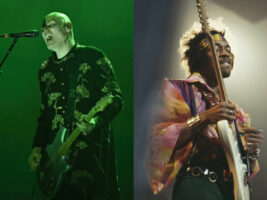 Billy Corgan has criticised the lack of attention paid to mental health in the music industry in a new interview, where he also shared his hopes of a more supportive culture for future artists.

The Smashing Pumpkins frontman was speaking as a guest on the Boomer & Gio show yesterday (22 September) where he compared the differences between how the music and sports industries treat rising stars.
“I think the music business in particular has been very late to the game with mental health and artists,” he said. “We lost Jimi Hendrix at 27 years old to addiction; think of all the music that Jimi Hendrix didn’t make.”
“We’re still talking about Jimi Hendrix 54 or 55 years after his death. I get lost in there because it’s so sad to me”
“The music business has been slow to understand [what to do] when you find a needle in a haystack,” Corgan said. “The NFL has figured it out but the music business hasn’t because the music business is based more on exploitation – which goes back to more of its 20th century roots.”
“But I think the 21st century of the music business should be a legacy of finding artists young, fostering them and making sure that they go on to create great music for generations to come.”
Corgan then pointed to his own generation of musicians, alluding to alt-rockers such as Kurt Cobain, Layne Staley, Chris Cornell, Scott Weiland and more.
“Think of all the people my generation has lost just to addiction and suicide alone. It is a travesty that there wasn’t more support systems around those artists. I don’t mean to throw shade at anybody. I just know how the business works. It’s one of exploitation.”
The Smashing Pumpkins recently announced the new album Atum, a 33-track LP billed as a sequel to their Mellon Collie and the Infinite Sadness and Machina/Machine of God albums. The album will be released in three acts featuring 11 songs each, with the first act due to be released on 14 November.
A special edition box set featuring 10 additional bonus tracks will also be released on 21 April along with the final act.

The post Billy Corgan on musician mental health: “We lost Jimi Hendrix at 27 years old to addiction; think of all the music he didn’t make” appeared first on Guitar.com | All Things Guitar.