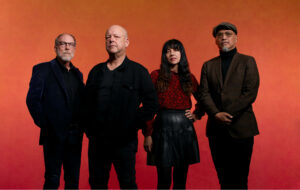 A lot of guitarists have played good parts. But few have watched on as those parts have chimed with a wider audience, bringing fame and occasionally fortune. Fewer still have reshaped the way we understand and enjoy music. Joey Santiago is one of them.

READ MORE: “We were sweating all day, smelling 70s solder as it’s burning our brains” The Wonder Years on their “nostalgic” new album

Whether it’s the ringing leads of Where is My Mind? or Debaser, the gauzy surrealism of Monkey Gone to Heaven, the cantering melodies of Dead or the buzzsaw craziness of Bone Machine, Pixies’ lead guitarist owns a particular corner of alt-rock history. In tandem with his college buddy and the band’s chief songwriter Charles Thompson IV – generally known as Black Francis or Frank Black – bassist Kim Deal and drummer David Lovering, he spent the late 1980s and early ’90s carving up expectations while releasing records that were as confrontational as they were exciting and pop-savvy. That loud-quiet-loud dynamic that you love? Pixies were one of its architects. Just don’t try to tell him that he’s earned some slack.
“There are moments where I feel so comfortable on stage, where I start feeling the imposter syndrome,” Santiago says from a hotel room in Manchester during the band’s European tour. “I’m like. ‘Oh, shit. This is too easy.’ I’m just thinking about all this horrible stuff that you can’t think about while you’re up there. I’d rather feel a bit incompetent, like I need to prove myself every day.”

There’s some of that energy in his approach to Pixies’ new record Doggerel. It’s their fourth LP since resuming as a recording group almost a decade ago – matching the number they made during their imperial phase – and their third with bassist Paz Lenchantin, who took the reins from the late, great Kim Shattuck of the Muffs in 2014. Deal, as she has been throughout this run, is on the outer and happy there. It’s also another chance to prove that this iteration of the band has something worthwhile to say beyond sets that remind everyone just how many classic songs they have to choose from.
Since the release of Indie Cindy eight years ago, there have been critical pastings and accusations of irrelevance to contend with, not something that Pixies had to pay any attention to back in the day. Doggerel, though, has enough about its planning and execution to suggest that this is still a band willing to push themselves, to feel like they’re learning again. Francis rolled up with 40 songs at the start of the process, leaving his bandmates with an awful lot of figuring out to do.
For Santiago, that meant firing up an engine that’s been humming on and off for four decades – his ability to find space amid the many twists and turns of his friend’s writing. “There were some songs where I understood,” Santiago says. “But there was one song where I was just like, ‘Where are the parts?’ I couldn’t understand this arrangement at all. And then I got it, finally, while I was tracking my own guitars. Like, ‘Oh, Jesus! It’s a lot simpler than I thought.’ That was The Lord Has Come Back Today, and that’s my favourite, man.”

That song is a loping slice of alt-Americana that lyrically references Neil Young’s Hey Hey, My My. There is a noticeable seam of that stuff on Doggerel, which at times can feel like some of American music’s great disruptors building something on top of its most recognisable foundations. It’s there on the grim, foreboding riff of Vault of Heaven, and the patient, doleful Western-isms of Thunder & Lightning. It’s there, honestly, even if Santiago doesn’t see it that way. “Americana? Yeah, we don’t care about that,” he says.
Doggerel was recorded in mid-winter at Guilford Sound, a beautiful studio in Vermont, with producer Tom Dalgety, who also helmed 2016’s ​​Head Carrier and its 2019 follow up Beneath the Eyrie. For some stretches, the band were snowed in, rehearsing in their accommodation before hitting the live room. “I have been living in Los Angeles,” Santiago begins. “I guess when you’re inspired, you’re inspired by anything, right? It doesn’t have to be music. So I was just looking out the window, like, ‘Whoa, look at that’. It was just freshly driven snow. You got trees dying, yet it’s beautiful. You can get into thoughts of mortality. Really dark shit. This is like the blues playing in my head. We’re all gonna die!”
In a short documentary accompanying the album’s announcement, Santiago is heard to say, “I was always in full music mode on this one. My headspace was a lot better.” When that sentiment is put to him again, he’s not entirely sure he got his point across properly. “When I heard that, it sounded like on the other records I wasn’t in full music mode,” he says. “It’s like, ‘Yo, this time around I’m gonna stop going to the zoo’. What I meant was that I really, really was just, 24 hours a day, in it.
Pixies’ Joey Santiago. Image: Press
“There are some times where I just had to take a break, you know, blah, blah, blah. But this time around, it was winter, we had heavy storms, blizzards and stuff, so that kind of made you more focused. I’ve always cared about making music. Sometimes there’s such a thing as caring too much, to the point where it hurts. Like, I shouldn’t be doing this. It’s getting a bit co-dependent here, you know?”
There are a couple of firsts here for Santiago too. He has his maiden Pixies writing credits, for the music on Dregs of the Wine, and the lyrics to the title track. “You know, it was just out of pure enjoyment, really,” he says. “I got this guitar, this beautiful ’54 Martin. It wasn’t the guitar I was looking for – I was willing to spend more, really, because I knew how much my dream guitar would cost. But this one ended up on my lap because it just felt the best on a couch. It was the pandemic, I wasn’t thinking about the stage at all. I was about the couch. I just started writing. I started doing chords and my girlfriend secretly recorded me. She made me listen to it, really made me listen to it. Then I got to fine-tune it, kind of like a fun puzzle.”
Santiago was born in Manila, and moved with his family to the US in 1972, settling first in Yonkers, New York, and later in Massachusetts. His interest in guitars was piqued, like so many of his contemporaries, by the Beatles and Jimi Hendrix. “Who is the best band? Really? It’s the fucking Beatles,” he says. “They’ll never leave me. Daytripper was the first thing I learnt.
Image: Press
“I had this acoustic guitar, my brother said he got it at Radio Shack, which is an electronics store that has no right making a guitar,” he adds. “They make speakers, receivers, wires, tools to cut wires. It got smashed, and then I got this fake Les Paul. The action was so bad, and the fretboard just had like raised wood. It was just awful. But that’s a good thing to do, so when you get a real instrument, it’s like, ‘Oh, yeah, this is what it’s supposed to be like’.”
With Francis playing a Telecaster throughout Pixies’ tenure, he has always been keen to maintain a point of difference, often favouring a ’57 Les Paul Custom Reissue. “Guitars have their own sound, you know? The first thing I’ll do with a Tele is just some doublestops and country-ish things. The Les Paul, honestly, starts to feel like a pen and paper to me.”
Once he was in the studio to work on Doggerel, Santiago adopted what he calls “the AC/DC vibe”. “I never heard them double up with a Tele, fuck that,” he says with a laugh. His go-to in Vermont was a guitar modelled after a Les Paul Goldtop by luthier Pavel Maslowiec, who has crafted instruments for everyone from Pink Floyd’s Dave Gilmour to Mike Ness of Social Distortion. “I gotta give props to this guy,” Santiago says. “This guitar’s on the wall and I said, ‘Yeah, I gotta have this’. And he didn’t want to sell it because it was like the first version. But it’s 200-year-old mahogany. And it resonates on the B note. Everything, the neck, everything. So it just rings.”

Doggerel feels like the sum of its parts in a middle-aged sort of way. It doesn’t fizz and crackle with oddball energy like Pixies’ songs did 30-something years ago – instead it’s muscular and deliberate. It feels poised, which will be a turnoff for some long-time listeners, but there is just something about the balance that the latter-day iteration of this band is able to achieve between unfussy rhythm work, Francis’s proselytising and the weirdo gravitas of Santiago’s playing.
On the opener, Nomatterday, we get the relationship in miniature, as Francis talk-sings up a storm, with Santiago answering succinctly, pointedly, without derailing the song. The solo, when it comes, is simple but arresting – you can imagine him staring dead-eyed into a camera as it uncoils. “You want to be heard, but if the listener wants to concentrate on something else they can,” he says. “But when they concentrate on the guitar, they go ‘Holy shit!’ That’s the fine line. You can’t really get in the way. A lot of guitar players do that really well – those are the ones who get played on the radio. The other ones just stay in the garage.”
Pixies’ Doggerel is out on September 30 through Infectious.
The post “You can get into thoughts of mortality.”: Joey Santiago on being heard, fake Les Pauls, and recording Pixies’ new album, Doggerel appeared first on Guitar.com | All Things Guitar.