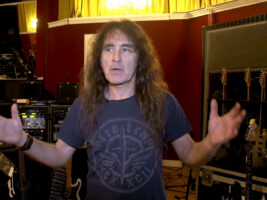 “This is a better album than Book Of Souls”: Iron Maiden detail production of new LP Senjutsu in short film

The NWOBHM greats Iron Maiden are still going strong, having just announced their 17th solo album Senjutsu last month, following the release of the single The Writing On The Wall and its expansive, post-apocalyptic video. Now, the band has opened a window into how that album came together, with a new short film documenting its recording.

In the film, bassist Steve Harris, frontman Bruce Dickinson and producer Kevin Shirley discuss the record on location at Paris’ Guillaume Tell Studio, where the band also recorded 2015’s The Book of Souls.
“It’s been a very, very good experience,” said Dickinson. “I think this is a better album than Book Of Souls. I really do. I haven’t heard it all back yet because I’ve been in the middle of doing it. I think it’s more complex than Book Of Souls. It’s certainly more varied. And I think there’ll be a genuine couple of surprises. There’s one of two songs that’ll have people going, ‘Eh? Is that Iron Maiden?’”
Harris added: “It’s part of the beauty of doing a new album. We never know what we’re going to do, there’s no preconceived idea about what to do and it just is what it is. It’s a representation of where we are at any given time.”
You can check out the film below.

Iron Maiden’s return began on 15 July, with The Writing On The Wall arriving alongside an animated music video full of references to the band’s discography and canon. It was produced in a collaboration with former Pixar executives Mark Andrews and Andrew Gordon, director Nicos Livesey and animation studio BlinkInk.
The post “This is a better album than Book Of Souls”: Iron Maiden detail production of new LP Senjutsu in short film appeared first on Guitar.com | All Things Guitar.