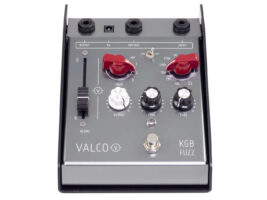 Valco FX has launched its new fully-featured fuzz pedal, the KGB Fuzz. Rather than being named after an intelligence agency, its variable impedance selection function makes the pedal suitable for Keyboards, Guitar and Bass.

READ MORE: Fuzz Was The Future: No one saw it coming

Alongside the variable input impedance, the pedal features a large slider potentiometer to blend the fuzzy signal with the dry signal. There’s also a dedicated dry output. In the same spirit as its name, blending a clean and fuzzy signal is great for retaining low-end clarity – especially in the case of bass and keyboards.
The fuzz operation is similar to that of a Lovetone Big Cheese. Aside from the rotary switch to choose from a number of input impedances and the blend control, you have knobs for fuzz, tone and output level, as well as a rotary switch to choose between a number of voices. These include bypassing the tone circuit entirely, adding a mids boost similar to a tonebender, scooping the mids similar to a Big Muff, and a gated, sputtery velcro fuzz modded.
On the front of the pedal is also a Line/Inst switch. This activates the impedance selector knob when set to Inst mode. In Line mode, impedance is fixed to work with line-level signals.
Aside from the ability to work with numerous other instruments, the impedance selection function allows for ample stacking options, taming the pedal’s input stage as needed depending on the character of other effects and buffers that might have come before it. As well as this, you can reduce the impedance to mimic that of a vintage fuzz unit for a spongey, dynamic response to your playing and/or volume control.
Check out Andy Martin demonstrating the pedal in his video below.

The pedal lists for $299, and is available now. Find out more at valcofx.com.
The post Valco’s KGB Fuzz brings blended Big Cheese tones to keys, guitar and bass appeared first on Guitar.com | All Things Guitar.