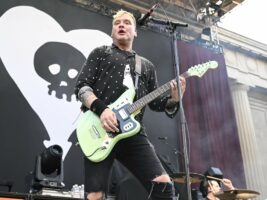 Blink-182 founding guitarist Tom DeLonge has shared a heartfelt message to thank Matt Skiba for filling his shoes as he prepares to rejoin the band.

READ MORE: “If you ever want a really weird guitar, and you don’t know anybody else that has one, Dweezil Zappa will have one” – Bush talk sonic experimentation for new record The Art of Survival

DeLonge left Blink-182 in 2015, to pursue his interests in ufology. Now that he’s returned to the band, it appear it’s now time for Matt Skiba to take a break.
In a message honouring Skiba’s work, DeLonge’s respect was clear:
“I wanted to take a minute and say thank you for all that you have done to keep the band thriving in my absence. I think you are enormously talented (I still love and listen to your band to this day). You have always been so kind to me, not only in the press, but also to others. I really noticed.”
But an important reason why he rejoined was to do with the health of his fellow band members: “Emotions between the three of us in blink have always been complicated, but Mark’s cancer really put things in perspective.”
Mark Hoppus came forward last year to reveal he was battling stage four cancer, but has since confirmed he’s cancer-free.
DeLonge continued in his message to Skiba: “To be honest, the band would not even be here today if it were not for your ability to jump in and save the day. So from my heart to yours, thank you for being a member of our band.”
Blink-182’s new single from upcoming album Edging is out now. The album will be released next year.

The post Tom DeLonge thanks Matt Skiba for keeping Blink-182 “thriving” in his absence appeared first on Guitar.com | All Things Guitar.