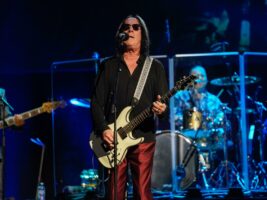 Prog-rock pioneer Todd Rundgren is having a hard time finding artists he deems to be ‘sincerely musical’ in the digital landscape where creators often venture into multiple art mediums.

READ MORE: “I feel like I can do almost anything with a Telecaster” – John Osborne of Brothers Osborne on how Fender’s American Vintage II stacks up to his collection

Rundgren was speaking in an interview with The Guardian, where he discussed the difficulties of finding artists he felt were worth listening to.
“It’s very hard to find artists who are sincerely musical nowadays, who haven’t simply leveraged their internet celebrity into a musical career,” Rundgren said. “The music is just mediocre.”
Rundgren voiced more of his woes in discovering music through modern platforms. “Then, most of the music you got exposed to was the Top 40 on the radio. Nowadays I open my newsreader and there’s 20 artists whose names sound like they’re internet passwords and you’ve never heard their music.”
As to why Rundgren is so consumed with seeking out new musical ideas, he explained: “I have to be constantly absorbing new ideas or at least seriously pondering new ideas. I have this obsession with not repeating stuff that’s already been done.
Not only what I’ve done already, but whatever other people have done.”
Space Force, Rundgren’s new collaborative album, is out today (14 October). The 74-year-old told The Guardian it was a reflection of 50 years producing and writing songs – as well as a representation of using psychedelics.