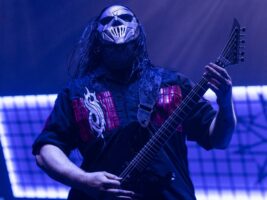 READ MORE: The Big Review: Jackson American Series Soloist SL3 – does this reborn icon reclaim its crown as the king of shred guitars?

In a new interview with Entrepreneur, the CEO revealed that nostalgia was a large factor in making the decision to revive the Jackson brand, revealing that requests from artists gave him insight into a potential market. He explained, “A classic case in point is Slipknot – you’ve got Mick Thomson playing a signature Jackson, which he grew up on, and on the other side of the stage Jim Root is playing a signature Charvel.”
“And I said, ‘Well, if these guys are reconnecting with the brand they played when they were kids, and there are people willing to pay five, six, or seven thousand dollars for guitars in the custom shop, there’s going to be demand for solid, American-made guitars built for working musicians in the $2,000 to $3,000 price point.’ And based on what we’re seeing, I think that belief is absolutely going to hold true.”
He also shared that ticketing company LiveNation’s press releases showing that the biggest genre of growth in live music is heavy metal helped spur the decision to lean into nostalgia, noting that metal fans are made of “the highest percentage of guitar aficionados and virtuoso players”.
“They’ll never fess up to it, but they will end up buying the exact brand their heroes play, sometimes in the exact colour,” Mooney explained. “So I said, ‘Let’s commit deeper to the category.’”
In the same interview, Mooney also discussed how data impacted Fender’s marketing and Artist Signature series, noting that the brand had found, among other things, that half of all new players are women, and that women tend to stay away from physical guitar shops.
“Women were buying guitars online because in the brick-and-mortar stores there was nobody to relate to, and they weren’t getting treated well,” he shared,
The post Fender CEO on how Slipknot’s Mick Thompson and Jim Root inspired Jackson’s revival appeared first on Guitar.com | All Things Guitar.