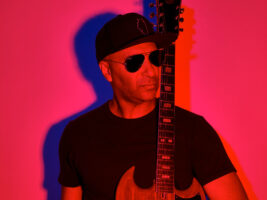 READ MORE: Tom Morello: right-wing terrorists “have co-opted the idea of standing against the Man”

Every track on the record features a guest artist, with a roster including artists such as IDLES, Ben Harper, Rodrigo Y Gabriela, Manchester Orchestra and San Holo. The release announcement coincides with the release of three launch singles: Human with Barns Courtney, Hard Times with Nathaniel Rateliff, Jim Jones, and Chipotle Joe and Raising Hell with Ben Harper. Take a listen to Raising Hell and Human below.

In a statement about the release, Morello compared the two albums to The Clash’s London Calling, saying: “Admiring The Clash at their apex moment, I sought to make a double album where artistic intent supersedes genre. I aimed to forge a central curated vision to tie together a sonically fearless, wild, and wide-ranging musical ambition with a tremendous cast of collaborators. And of course, there are many guitar solos.”
The Atlas Underground Flood will be released on 3 December. You can see its tracklist and guestlist below.
1. A Radical in the Family (feat. San Holo)
2. Human (feat. Barns Courtney)
3. Hard Times (feat. Nathaniel Rateliff, Jim Jones, and Chipotle Joe)
4. You’ll Get Yours (feat. X Ambassadors)
5. I Have Seen the Way (feat. Alex Lifeson, Kirk Hammett, and Dr. Fresch)
6. The Lost Cause (feat. Manchester Orchestra)
7. The Maze (feat. Andrew McMahon in the Wilderness)
8. Ride At Dawn (feat. BreakCode)
9. Raising Hell (feat. Ben Harper)
10. The Bachelor (feat. IDLES)
11. Parallels (feat. Jim James)
12. Warrior Spirit (feat. Rodrigo y Gabriela)
The post Tom Morello announces his second star-studded solo album of 2021, The Atlas Underground Flood appeared first on Guitar.com | All Things Guitar.