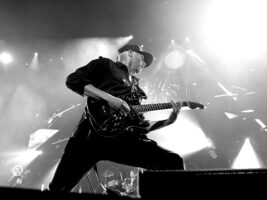 Tom Morello: right-wing terrorists “have co-opted the idea of standing against the Man”

Tom Morello has lamented the state of political discourse in the USA, and how far-right groups have co-opted the same anger at systemic injustice that Rage Against The Machine are named for.

READ MORE: Tom Morello used to “disavow” Hendrix due to racist comments: “I had to distance myself from that to be the guitarist I wanted to…

Speaking to The Guardian, Morello said there was irony in how: “one of my dreams has always been to storm the Capitol, but not with a bunch of all-white, right-wing terrorists, you know?” Morello explained how he viewed America’s far-right embracing this anger lacked a view of the bigger picture: “The ugliest part about it is how they have co-opted the idea of standing against the Man, at least in the US,” he added. “There can be no nuanced thinking, like: ‘Yes, big pharma is horrible, but getting a vaccine to save your grandma is good.’ It’s a dumbed-down version of resistance.”
He added that the anger from some of America’s right isn’t unjustified, saying the Trump supporters he knows from where he grew up “are decent people. It’s not their fault for being fucked over by the oligarchy for decades. Now what do we do to find a way to really resist the stuff that is destroying the planet, that’s causing working people’s lives to be worse than their parents’ were? Poverty and hunger kill more people than anything else on the planet and they are human-made problems. Those are the things that we need to be digging into, rather than being sidetracked by this carnival barker bullshit”
Morello was also asked about his thoughts on right-wing protestors chanting Rage Against The Machine’s Killing In The Name, a situation that drew comment at the time as the protesters bore some pro-police “thin blue line” flags. Killing In The Name’s lyrics were inspired by the police beating of Rodney King, which was filmed and broadcast on TV. The officers who heavily beat King, a Black man, were all acquitted, leading to the LA riots.
Of the use of the song by right-wing protestors, Morello stated: “there’s no accounting for stupidity. There’s a long list of radical left anthems that are misunderstood by bozos who sing them at events like that, from Woody Guthrie’s This Land Is Your Land to Bruce Springsteen’s Born In The USA to John Lennon’s Imagine – those people have really no idea what the hell they’re singing about.
However, Morello explained that it was a side-effect of creating appealing, compelling music that still retains a message, stating: “The one thing that I speak to in all of those instances is that there’s a power to the music that casts a wide net, and that’s a good thing, not a bad thing. In that net, there will be the far-right bozos, but there will also be people that have never considered the ideas put forward in those songs and are forced to consider those ideas because the rock’n’roll is great.
“You can either put a beat to a Noam Chomsky lecture – no one wants that, but there’s going to be no mistaking what the content is – or you can make music that’s compelling.”
The post Tom Morello: right-wing terrorists “have co-opted the idea of standing against the Man” appeared first on Guitar.com | All Things Guitar.