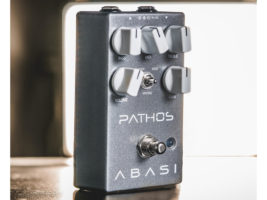 This signature pedal packs a host of drive options.
Animals as Leaders axeman Tosin Abasi has teamed up with Brian Wampler on the Abasi Pathos. This is the first pedal from the guitarist’s company, Abasi Guitars, and it’s essentially the Swiss Army knife of dirt boxes.
It can give a driven amp a slight nudge, be thrown in front of a digital modeller as a boost, or even serve as a dirt channel in front of a clean amp. In terms of tone, the unit is based on an American-style tube amp.
Jumping into the controls, the stompbox sports a three-band EQ and dedicated “Volume” and “Gain” knobs. By toggling its “Voicing” switch, users can select between two voicing presets: a “Smooth” option that delivers a stirring crunch and an “Edge” option that serves up scorching distortion with plenty of sustain.
If you’re looking for a distortion pedal to spice up your play, this may be it. Check out the pedal in action here:

Thurston Moore releases Cantaloupe, taken from his upcoming LP, By The Fire