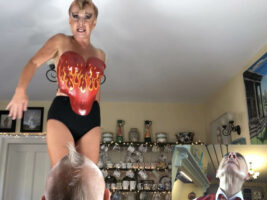 Toyah Willcox has graced the internet once more with a new Sunday Lunch cover, this time of The Rolling Stones‘ Sympathy For The Devil. Now he’s back from tour with King Crimson, her husband Robert Fripp is there to look on.

Dressed in suitably satanic attire, Willcox is joined in her dramatic presentation by Fripp, who sports some eyeshadow and a flame-red waistcoat. “Robert is at home and he’s seated in the kitchen again, Toyah’s ditched the cooking and for Sunday Lunch well – it’s Toyah aboard the kitchen table!” Willcox captioned the new video. You can watch the new cover below.

Earlier in the pandemic, Wilcox explained the inspiration behind the videos, saying she decided to teach her 74-year-old husband how to dance in an attempt to dispel his lockdown blues. “He was withdrawing,” she said. “So I thought: ‘I’m going to teach him to dance.’ And it became a challenge.”
When the video went online, Wilcox admitted Fripp was “fucking furious” and felt “he was being mocked”. It took some convincing, but Fripp eventually changed his tune when he learned it was a way to stay connected with his fans.
“The response was so overwhelmingly positive,” she recalled. “And now, six months down the line, he can see that it was quite an important thing to do, in that it became a shared experience with an audience that needed to be reminded of the beauty of human laughter.”
She added: “I’ve not put him in such desperate situations.”
The post Toyah Willcox table-dances over Robert Fripp for a cover of Sympathy For The Devil appeared first on Guitar.com | All Things Guitar.