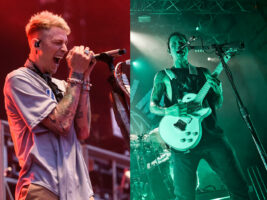 Trivium singer and guitarist Matt Heafy has weighed in on the conflict between Machine Gun Kelly and Slipknot, taking a shot at Kelly for what he called a “cosplay” of a pop-punk identity.

READ MORE: Trivium’s Matt Heafy has tested positive for COVID-19: “Thankfully due to being vaccinated it merely feels like a tour cold”

The conflict between Kelly and Slipknot has been met with a mix of confusion and derision from many metal fans, to the point where the bulk of the coverage of his set at Louder Than Life Fest was focused on how much he was being booed and flipped off. Kelly has a history of starting beef with established and more acclaimed musical artists, so it’s perhaps no surprise that die-hard fans of heavy music see Kelly’s behaviour as another entry into that saga.
Among them: Trivium’s Matt Heafy, who took to Twitter; to say: “I’d like to formally diss Machine Gun Kelly for ‘being 31 years old wearing a fucking 16-year-old pop-punk cosplay identity on a fucking stage.’” Heafy’s comments seem to stem from Kelly’s notable genre-switch: his 2020 album Tickets To My Downfall almost entirely eschewed hip-hop in favour of pop-punk, in stark contrast to his previous records.
Below this Tweet, Heafy presented an alternative moniker for Machine Gun Kelly (which, surprisingly, isn’t his real name). “Squirt Gun Smelly,” Heafy wrote.
Later on, Heafy did issue an apology towards Machine Gun Kelly following these comments. “I’d like to publicly apologize for my tasteless comments about MGK,” he said. “I just found out he’s been afflicted by the Ligma variant. It’s really getting real out there. Thoughts and prayers homie.”
Meanwhile, Kelly has taken to Twitter to claim that reports about him being booed at Louder Than Life Fest were exaggerated, saying “I don’t know why the media lies in their narrative against me.”
He has also made headlines for appearing to punch a fan in the head after entering the moshpit during his performance at the festival.
The post Trivium’s Matt Heafy “formally disses” Machine Gun Kelly for wearing a “16 year old pop punk cosplay identity on a fucking stage” appeared first on Guitar.com | All Things Guitar.