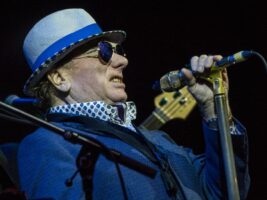 Van Morrison has started legal proceedings against the North Ireland health ministry and its minister Robin Swann over an opinion piece where Swann called Morrison’s anti-lockdown campaigning “bizarre and irresponsible”.

READ MORE: Eric Clapton says being criticised for his misinformed, dangerous vaccine stance is “an affirmation that I’ve been doing the right thing”

In his opinion piece for Rolling Stone magazine, Swann wrote that while Morrison is a “music legend”, the minister professed to feeling “a real feeling of disappointment” towards the musician’s anti-lockdown stance, which has culminated in the singer releasing three anti-lockdown singles in 2020.
Morrison has also joined with fellow anti-vax activist rocker Eric Clapton in releasing their anti-lockdown collaborations This Has Gotta Stop and Stand And Deliver, the latter of which caused particular controversy for comparing lockdowns with slavery.
Swann continued, “If you see it all as a big conspiracy, then you are less likely to follow the vital public health advice that keeps you and others safe,”
“His words will give great comfort to the conspiracy theorists – the tinfoil hat brigade who crusade against masks and vaccines and think this is all a huge global plot to remove freedoms.”
John J Rice and Co, who represent Morrison, confirmed with The Guardian that their client was indeed taking action against both the minister and ministry, but did not disclose the grounds of their case.
This is not the first clash between Morrison and Swann, with the minister from the Ulster Unionist party previously taking legal action against Morrison in 2021 after Morrison labelled the minister as “very dangerous” following the cancellation of four of Morrison’s gigs scheduled to be held at the Europa Hotel in Belfast earlier that year in June due to a blanket ban on live music at all venues as part of COVID-19 restrictions.
Morrison has previously called socially-distanced gigs “psuedo-science”, calling on fans in an open letter in 2020 to support full-capacity live performances. In the letter, he also called on his “fellow singers, musicians, writers, producers, promoters and others in the industry to fight with me on this”, controversially adding, “Come forward, stand up, fight the pseudo-science and speak up.”
The post Van Morrison launches legal proceedings against Northern Ireland health minister over COVID-19 opinion piece appeared first on Guitar.com | All Things Guitar.