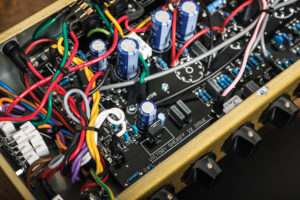 
Brit amp builder Victory’s ‘skeleton chassis’ has become a familiar sight, and its design was a collaborative effort with Guthrie Govan. The idea was to make Govan’s V30 The Countess amp compact and light so it could be stowed away in overhead lockers on aeroplanes, and the concept has been carried over to various other Victory amp models.The post Victory Sheriff 22 appeared first on Guitar & Bass.