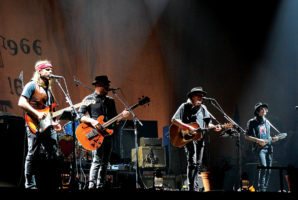 Interview: Promise Of The Real

They melted fans’ faces on Neil Young’s Rebel Content tour. G&B talks with sibling newcomers Promise Of The Real, who have re-lit the Godfather Of Grunge’s creative fuse…
Story | Terri Saccone
When Neil Young released his 36th studio album The Monsanto Years in 2015, it featured up-and-comers Promise Of The Real, who replaced long-time cohorts Crazy Horse. POTR are a band built around Lukas Nelson, that – when playing with Young – includes his younger brother Micah, both offspring of iconic American musician Willie Nelson.The post Interview: Promise Of The Real appeared first on Guitar & Bass.