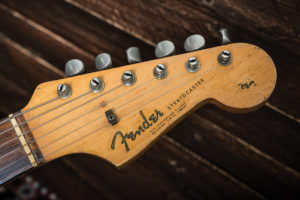 If a played to death pre-CBS Strat is your fantasy guitar, this example from 1964 may be much as you have imagined it. Huw Price plays the dream.
By 1964, the Stratocaster was already a decade old and the design had undergone some significant changes since its inception shortly before the dawn of rock ’n’ roll.The post Vintage Bench Test: 1964 Fender Stratocaster appeared first on Guitar & Bass.