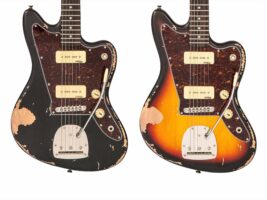 UK-based Vintage has fired out a new Jazzmaster-style model that should offer players wanting to add a distressed offset to their collection a means to do so for under £500.

The Icon V65V comes in two very attractive, worn finishes – black or sunburst – that give the guitar the appearance of a pawnshop gem that’s been beaten, traded and survived its fair share of van-powered punk tours.
Going into its specs, this guitar has an alder body and a bolt-on soft-C maple neck with a rosewood fingerboard and 22 frets. Its scale length is 25.5” scale length, matching that of most Fender Jazzmasters.
Where electronics are concerned however, the guitar diverges quite a bit from Fender’s Jazzmaster, with a pair of Wilkinson Soapbar P90s (not Jazzmaster single-coils) and a simplified control section with volume and tone knobs, as well as a three-way pickup selector; there is no secondary control section to be found here either.
Each guitar is completed with a vibrato bridge and Wilkinson WJ55 machine heads, as well as a tortoiseshell pickguard.
Listen to a short demo of the (non-worn) Vintage Icon V65 in action below:

You can pick up a Vintage Icon V65V now at just £429 each.
Learn more at vintageguitarsus.com
The post Vintage’s Icon V65V looks like an offset pawn shop gem for less than £500 appeared first on Guitar.com | All Things Guitar.