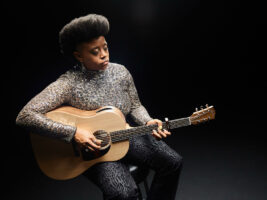 Celebrating the launch of its new range of acoustic guitars, the Generation Collection, Gibson has teamed up with three singer-songwriters: Amythyst Kiah, Nikki Lane and Scarypoolparty. Amythyst Kiah has kicked things off with an intimate performance of her song Wild Turkey.

In the performance, Kiah is playing a Generation G-45 acoustic. Like all the instruments in the collection, it features a solid sitka spruce top and solid walnut back and sides, as well as a utile (also known as sipo mahogany) neck with the new ‘Advanced Response’ profile.
The G-45 has a slightly slimmer take on a J-45 body shape, with no cutaways and a 24.75-inch scale length.
Wild Turkey is taken from Kiah’s recent record Wary + Strange, which arrived in June. The song features intricate fingerpicking, and lyrics that mourn her mother, who drowned when Kiah was a teenager. You can see the performance below.