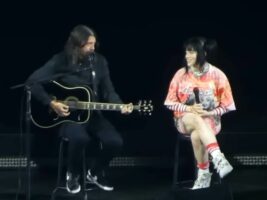 In an unlikely collaboration, Foo Fighters frontman Dave Grohl has gone on stage with Billie Eilish, performing a track together in memory of Taylor Hawkins.

READ MORE: Måneskin To Team Up With Tom Morello For New Single Gossip

The event took place on Thursday (15 December), when the pop star was headlining a show at the Kia Forum in Los Angeles.
Grohl was one of the numerous guests to make an appearance on the night, making a surprise appearance mid-show to perform an acoustic rendition of Foo Fighter’s 1997 single, My Hero.
Find fan footage of the moment below.

The performance was done as a heartfelt tribute to the band’s drummer Taylor Hawkins, who died in Bogota earlier this year.
The decision to hold the event was likely decided following Eilish’s appearance at the 64th Annual Grammy Awards, which were held in April. It was here that the singer wore a t-shirt sporting the drummer’s photograph on it during a performance.
Entering the stage last week, the Foo Fighters frontman spoke openly to the crowd about how he was moved by Eilish’s choice of attire when watching the event at home.
“Earlier this year all of the Foo Fighters and our families gathered together at my house to watch the Grammys, and when Billie came out for her performance in a Taylor Hawkins t-shirt, the room was filled with real tears of love and gratitude,” he said.
“From our families who aren’t here tonight, and the Hawkins family and everyone, we’d like to thank you very much. So let’s sing it for Taylor.”
Following the concert, Eilish took to Instagram to thank the musicians who appeared at her recent stretch of performances, including Phoebe Bridgers.
“Crazy. I’m such a fan. So grateful. Thank you la for coming back for me & thank you to some of my [heroes].”