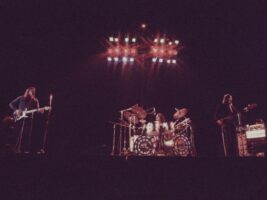 Pink Floyd have subtly added a host of previously-unheard concerts and tracks to online streaming services, however, they may not be around for long.

READ MORE: Måneskin To Team Up With Tom Morello For New Single Gossip

The new collection follows the iconic band throughout their performances in 1972 – shortly before they released their career-defining eighth studio album, Dark Side of the Moon the following year.
The eighteen live shows initiate on 23 January, with the first performance in the UK. From here, they progress through to the USA, Japan, Germany, France and Belgium, ultimately ending in Switzerland on 9 December.
Pink Floyd’s entire four-night stint at London’s Rainbow Theatre is also included, as well as a never-before-seen compilation of five songs entitled Alternate Tracks 1972. This consists of rare demos and remixes of songs, including rare alternate versions of Time and On The Run.
Strangely enough, this isn’t the first time that Pink Floyd have quietly deposited a wide variety of performances online.
Last year, in a similar move, the band surprised fans by randomly putting a dozen unreleased concerts spanning from 1970 to 1972 online, without any prior notice.
These surprise announcements appear to be a tactic employed by the band to extend the rights of the recordings using Europe’s “Use It or Lose It” provision.
It is worth noting that since the copyright has been reestablished for the batch of performances released in 2021, all of the releases have now been taken down from streaming services – suggesting that these eighteen concerts may not be available for long.
In other Pink Floyd news, it seems the band have been eager to sort through the archives throughout this year. Back in September, they released a long-awaited reissue of their 1977 album, Animals.
Additionally, David Gilmour and Roger Waters appeared in a recent Disney+ documentary about the history of Abbey Road Studios, entitled If These Walls Could Sing. It was also revealed in October that a documentary on the band’s founding member, Syd Barrett is set to be made.
The post Pink Floyd quietly debut 18 previously-unreleased concerts from Dark Side of the Moon era appeared first on Guitar.com | All Things Guitar.