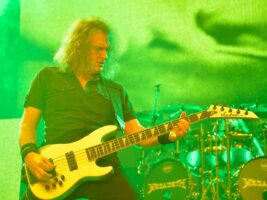 Former Megadeth bassist David Ellefson has teamed up with James Rivera’s Metal Asylum to ring in the new year with a series of rock and metal performances at a live bar in Texas.

Headlining the New Year’s Eve event was metal project Metal Asylum, who were joined and supported by Santa Oscuridad and Megadeth tribute band, Rust in Peace.

Ellefson, who was announced as a special guest for the evening, also played a set of classics from his former band alongside Rust in Peace.
Check out the performances of Symphony of Destruction and Peace Sells below.

What can I say. the inner 12 year old me is living for this moment. I just played rust in peace in its entirety with…
Posted by Daniel Contreras on Saturday, December 31, 2022

And later in the night, Ellefson joined Rivera’s Metal Asylum on stage for a rendition of the Judas Priest’s hit track Living After Midnight.