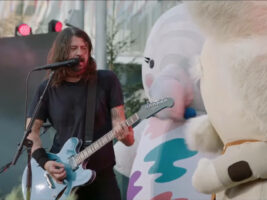 The Foo Fighters were joined by a trio of adorable mascots at their recent performance at Dreamforce 2021, the three-day conference of San Francisco tech company Salesforce.

The band tore through their 2002 hit All My Life when Astro, Einstein and Ruth, the company’s oversized mascots, took the stage to dance along energetically. Frontman Dave Grohl later calmed the performance down a touch to give the mascots a chance to catch their breath.
“I’m going to break it down, because I know you’re fucking dying in that suit right now,” Grohl said onstage. “Einstein, are you okay?”
After busting out into a brief edition of Cat Scratch Fever, Grohl said into the mic: “Just when I thought life couldn’t get any fucking weirder. You need to chill the fuck out, Einstein. You’re going too hard, brother.”
Watch it below:

This also isn’t Grohl’s first onstage encounter with the cute and cuddly. Back in 2015, he participated in an epic drum battle with Sesame Street’s resident skinman, Animal. “Waited years for this, Animal,” Grohl said then, to which Animal responded: “Now we see who best.”

The post Watch: Foo Fighters rock out with some adorable, oversized mascots onstage appeared first on Guitar.com | All Things Guitar.