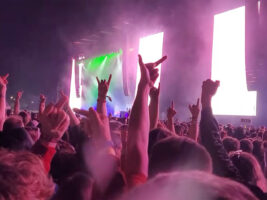 Last week, Machine Gun Kelly decided to throw some insults Slipknot’s way, with the 31-year-old pop-punk musician saying he was glad that he wasn’t a 50-year-old wearing a “fucking weird mask.” In kind, metal fans attending Louder Than Life Fest over the weekend decided to make his performance at the festival as embarrassing as possible, booing throughout his performance.

A video posted to YouTube on 26 September shows Kelly performing his set to a steady stream of boos, chants of “you suck,” and constantly-raised middle fingers. Despite the negative feedback, Kelly powers on, leaving gaps in his choruses for the audience to sing along. As far as the video shows, however, these were not filled by fans reciting his lyrics but instead used as an opportunity to boo slightly louder.
Towards the end of the video, Kelly seemingly encourages those who have a problem to come up on stage and sort things out hand-to-hand. “Fuck yeah, dude,” he says, “everyone fucking get on the fucking shoulders of some strong sweaty guy and fucking crowdsurf on up here.”
Helpfully, he then begins his next track by giving the audience a primer on the lyrics – because “clearly people won’t know.” Instead of singing the lyrics back to him, however, Kelly is met with more booing and one tenacious metalhead loudly yelling “fuck you” between every line. As the song begins, Kelly decides to give a shoutout to “all the beautiful girls in the crowd,” who boo him as well. The video then cuts out.

While the audience reaction could be a coincidence, it’s more likely it’s a reaction to the snipes at Slipknot frontman Corey Taylor Kelly made last week, beginning with his mocking of the band at Riot Fest. Following these comments, Kelly took to Twitter to address the feud and offer some more context. He claimed that the origin of his anger was seeing Taylor knock him in an interview, claiming he was bitter after Kelly fired him from a potential guest spot on his album Tickets To My Downfall.
However, it’s hard to say this added context made Kelly look any more reasonable, as shortly afterwards Taylor shared screenshots of emails that imply Taylor made the decision to quit the project, after Kelly dismissed his ideas for his guest verse.
The post Watch Machine Gun Kelly get relentlessly booed at Louder Than Life festival appeared first on Guitar.com | All Things Guitar.