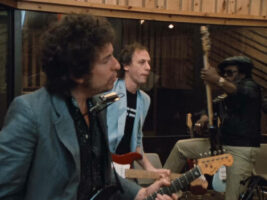 READ MORE: The Genius Of… Love And Theft by Bob Dylan

Filmed by the Maysles Brothers in 1983 at the Power Station recording studio in New York, the restored footage comes alongside the release of Dylan’s latest Bootleg Series, Springtime In New York. Musicians playing on the track are Mark Knopfler, Mick Taylor, Sly Dunbar, Robbie Shakespeare and Alan Clark.
See the footage below.

Dylan is currently facing a lawsuit that alleges he sexually assaulted a 12-year-old girl in 1965. The claim alleges that Dylan, then in his mid-20s, used his status as a famous musician to befriend and groom the girl (identified as “J.C.” in the suit) over a “six-week period” between April to May 1965 with the intent of sexually abusing her.
Bob Dylan biographers have since disputed the claim, pointing out that records of Dylan’s whereabouts in 1965 conflict with the claims made in the suit. Records state that Dylan was in either England or Portugal for the entire month of May, performing shows at the London Albert Hall early in the month and recording live sessions at the BBC’s studios on 1 June.
A representative for Dylan told USA Today: “The 56-year-old claim is untrue and will be vigorously defended.”
The post Watch newly-unearthed footage of Bob Dylan, Mark Knopfler, Mick Taylor and more recording Don’t Fall Apart on Me Tonight appeared first on Guitar.com | All Things Guitar.