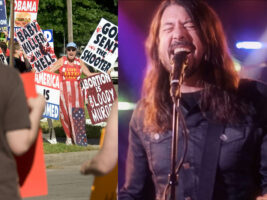 Last month the Foo Fighters donned their disco alter-ego Dee Gees in order to release Hail Satin, a record jam-packed with Bee Gees covers. Now they’ve decided to use the power of disco for good, drowning out the Westboro Baptist Church’s hateful messages in a drive-by disco truck.

Videos posted to social media show Grohl and crew approach, the sound of disco getting progressively louder, as the hate group pickets the Foo Fighters’ show. Members of the group stand around holding signs with messages such as “God Hates Pride,” “God Is Your Enemy,” and “Free Will Is A Satanic Lie,” as the truck bearing a live disco band playing at full-blast trundles along. It makes for truly surreal imagery.
“The way I look at it, is that I love everybody. Isn’t that what you’re supposed to do?” Grohl says over the microphone. “Can’t you just love everybody? ​’Cause I think it’s about love! That’s what I think, we’re all about love. And you shouldn’t be hating, you know what you should be doing? You should be dancing!” The band then launches into the full song You Should Be Dancing.

It’s not the first time the Foos have encountered the hate group, who have previously picketed them and a handful of other rock bands. In 2015, the notoriously anti-Islamic, antisemetic, homophobic organisation arrived to the sounds of Never Gonna Give You Up blasting at full volume, which made their protests against the rock band seem, once again, too silly to be taken seriously.
Whether Grohl’s message of love and acceptance will get through to the group remains to be seen, but it’s commendable regardless. The Anti-Defamation League describes the Westboro Baptist Church as “virulently homophobic”, and that its anti-homosexual rhetoric is often a cover for antisemitism, anti-Americanism, racism, and, perhaps ironcially, anti-Christianity. Rock bands aren’t its only protest target, either, with the group picketing the funerals of soldiers and those who have died of HIV/AIDS, as well as other churches it disagrees with.
The post Watch the Foo Fighters’ disco alter ego drown out the Westboro Baptist Church with a Bee Gees cover appeared first on Guitar.com | All Things Guitar.