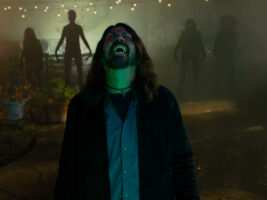 Foo Fighters have released the trailer for their upcoming horror comedy film, Studio 666. The movie will hit US cinemas in February 2022.

READ MORE: Watch Paul McCartney and Foo Fighters cover Get Back at the 2021 Rock Hall ceremony

The film tells the story of the Foo entering a Californian mansion to record their long-awaited 10th record. Thanks to the “grisly” rock and roll history the house is soaked in, things soon start to get supernatural, with the lives of the band – and the completion of the 10th record – threatened.
Studio 666 is rated R for strong bloody violence and gore, so expect a splatter-filled feature. Check out the trailer below.

The film won’t be the band’s first brush with the world of on-screen horror and the supernatural – the video for the track Everlong pays tribute to Evil Dead, and Dave Grohl played the role of Satan in Tenacious D In The Pick of Destiny.
Studio 666 will be released in the US on 25 February this year. It stars band members Dave Grohl, Taylor Hawkins, Nate Mendel, Pat Smear, Chris Shiflett and Rami Jaffee, alongside Whitney Cummings, Will Forte, Jenna Ortega, Leslie Grossman and Jeff Garlin.
The post Watch the trailer for Foo Fighters’ feature-length horror comedy Studio 666 appeared first on Guitar.com | All Things Guitar.