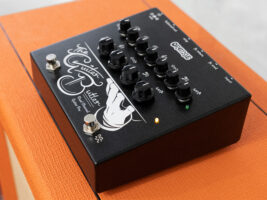 Orange introduces the Guitar Butler, a fully-featured ‘rig in a box’ preamp pedal

Orange Amplification has introduced the Guitar Butler, a six-string focused version of its Bass Butler. The pedal offers a fully-featured two-channel preamp along with a versatile set of I/O.

READ MORE: Orange’s Super Crush 100 is a solid-state amp that promises the character and definition of tubes

The preamp pedal can be used in a number of ways. The quarter-inch Amp output can be run into a standard amplifier, as if it were an overdrive pedal. Results will vary here depending on the amplifier you use, but as the Guitar Butler is a full preamp, expect heavy overdrive if you’re running into a low-headroom or overdriving amplifier.
For more control, the Amp output can run into a dedicated power amplifier or an FX loop return to use the Guitar Butler as your only preamp stage. To use the pedal direct, there is a balanced XLR output with a ground lift switch. This output has a cabinet simulation, and can be run straight into a mixer or audio interface. There’s also a buffered effects loop if you want to run time-based effects after the preamp’s gain stages.
The Guitar Butler has a clean and a dirty channel. The clean channel has a gain control and a three-band EQ, while the dirty channel has a gain control, a presence control, a three band EQ and two master volumes. These two volumes are switched between with the left footswitch, while the right footswitch changes channel.
Check out designer Ade Emsley talking about and demonstrating the Guitar Butler below:

The Guitar Butler lists for $429. Find out more at orangeamps.com.
The post Orange introduces the Guitar Butler, a fully-featured ‘rig in a box’ preamp pedal appeared first on Guitar.com | All Things Guitar.