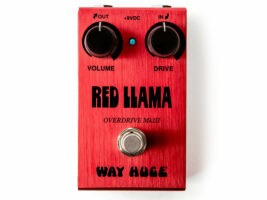 READ MORE: MXR Duke Of Tone: Are MXR and Analog Man teaming up on an affordable King Of Tone overdrive?

The brand says that the MKIII was a “painstaking recreation” of the original, which took months of testing modern components to recreate not just the sound of its ancestor, but its signature touch sensitivity as well.
With just two knobs – one for volume and the other for drive – this overdrive makes it easy to dial-in the tone you want from it. Its compact and brightly coloured enclosure also makes it easy to take on the road, and difficult to misstep on your board.
“With delicious harmonic overdrive reminiscent of a vintage tweed amp and a wide array of tones from soft and cuddly to burly and brutal, this llama can bite,” writes a press release. “But it also purrs. And screams –if you smack it just right. You might lose a few fingers and toes, but you’ll be glad you did.”
Check out the Way Huge Red Llama Overdrive MKIII in action below:

If you’re interested, you can pick one of these up right now at $149.99 at retails around the globe, or directly from jimdunlop.com.
The post Way Huge goes way small with a compact Red Llama overdrive for its 30th anniversary appeared first on Guitar.com | All Things Guitar.