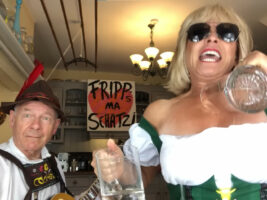 Fripp and Toyah were attired in a traditional lederhosen and drindl for the cover of the 2004 hit, which also saw Toyah pouring two jugs of water down the drindl while singing the lyrics “Ich habe keine lust”. Continuing their tradition for the show, their kitchen cabinets carry the message “Fripp is my Schatzi” – German word for ‘sweetheart’.
Watch Fripp and Toyah cover Rammstein’s Keine Lust below:

The pair recently announced they will hit the road in 2023 for the Toyah and Robert’s Sunday Lunch Tour. Venues and ticketing details have yet to be revealed, but the information will be forthcoming soon.
Fripp and Toyah’s weekly Sunday Lunch cover series has become a mainstay, and has heard them take on a number of classic hits, including Neil Young’s Rockin’ in the Free World, Black Keys’ Lonely Boy, Smashing Pumpkins’ Bullet with Butterfly Wings and Billy Idol’s White Wedding.
Fripp and Toyah have also announced an official T-shirt (and other merch) from the Toyah and Robert online store.
Toyah will also release her upcoming single, a cover of Grace Jones’ classic Slave to The Rhythm, on 1 August. Toyah has an intimate connection with the Darlow, Trevor Horn, Bruce Woolley and Stephen Lipson-written track, having originally sung on the demo that was rejected by Frankie Goes To Hollywood before it was picked up by Jones.
”It sounds amazing, totally different to Grace Jones’ iconic and perfect original,” Toyah has said of her single.
“My version will surprise all, it has a connection to the words that suddenly revealed itself as soon as I put the main vocal down and Fripp played. The three of us really are a great musical team, we are very excited.”
The post Robert Fripp and Toyah don a lederhosen and drindl for Rammstein’s Keine Lust appeared first on Guitar.com | All Things Guitar.