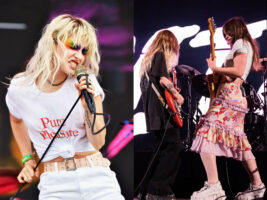 Wet Leg address sexist comments in chat with Hayley Williams: “There will always be a comment like, ‘girls shouldn’t play guitar’”

The duo released their debut record earlier this year after their track Chaise Longue went viral online, cannonballing them into popularity. Despite their success, the pair, Rhian Teasdale and Hester Chambers, have faced a harsh backlash of sexist comments about their music, and in particular their ability to play guitar.
In a new discussion on the Face-To-Face podcast from The Face magazine, both Teasdale and Chambers spoke to Paramore vocalist Hayley Williams – who has also been outspoken on the misogyny she faced growing up in alternative music over her long career in the pop punk scene.
“I think for us one of the hardest or most irritating things about being women is probably just the stupid comments on the internet like, ‘oh she’s holding that guitar but she’s not actually playing it’,” Teasdale explained.
“like for example – when I am not using my guitar but then I need to play it in the chorus or something, there will always be a comment being like, ‘girls shouldn’t play guitar, women shouldn’t play guitar’, and it’s just like… it’s so dated but it’s still there! And I just hate it so much.”
Williams and Chambers groaned along at the shared experience as she spoke. Williams released two solo records on her break from making music with Paramore, Petals For Armor (2020) and Flowers For Vases (2021). In 2020, she performed a set for Tiny Desk, where she played her Ernie Ball Music Man Mariposa.

She reflected on the experience, sharing that she was physically shaking when playing the guitar because she knew she would receive critical comments in regards to her playing. “I don’t even play guitar on stage, I don’t even dare,” she told Wet Leg. “And I love to play guitar but I don’t know if I could handle… man. I feel you so hard.”
Paramore are due to release their sixth studio record, This Is Why, in February, you can find out more at paramore.net. Wet Leg are touring through 2023, you can get tickets at wetlegband.com.
The post Wet Leg address sexist comments in chat with Hayley Williams: “There will always be a comment like, ‘girls shouldn’t play guitar’” appeared first on Guitar.com | All Things Guitar.