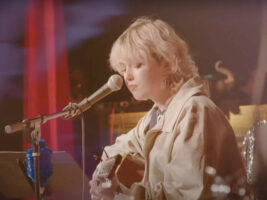 Dave Grohl’s daughter, Violet Grohl, performed a cover of Janis Ian’s 1975 hit At Seventeen with her acoustic guitar for the fourth night of Hanukkah Sessions.

16-year-old Grohl has already performed with her father before, having appeared at both the LA and London Taylor Hawkins Tribute Concerts, which were hosted in memory of the Foo Fighters drummer who sadly passed away in March.
The Hanukkah Sessions were started by Dave Grohl and fellow musician Greg Kurstin in 2020, as a way for artists cover tracks from a range of Jewish musicians to celebrate Hanukkah.
Counted in by the Nirvana drummer, Grohl played her acoustic guitar and showcased her impressive vocal talent for the famous track. Check out the full performance below:

Other performances have taken place across this year’s event from the likes of P!nk, Tenacious D, Judd Apatow and Inara George.
Last year, Grohl and her father released a cover of X’s Nausea from the band’s 1980 debut album, Los Angeles. Dave Grohl has already stated that he believes his daughter’s generation “will start the next revolution” in music. In a conversation with MSNBC he said, “What I see is this mutation, this change, this growth and progression that her generation, they’re the rock stars now. It’s not old guys like me.”
He continued, “It’s that generation. Give it five or ten years, give it three or four years and you’ll see how this mutation is happening.” Reflecting on how playing songs like My Hero joins everyone together from all walks of life, he then went on to share how he believes that it’s no longer his job to incite big changes in music.
He said, “I don’t feel like it’s our job as a band to create any sort of revolution. It’s to bring everyone together in those moments. It’s my daughter’s job to create that next revolution and I think she will.”
For more clips from the Hanukkah Sessions, check out the Foo Fighters YouTube channel.
The post Watch: Violet Grohl performs Janis Ian cover with acoustic guitar for Hanukkah Sessions appeared first on Guitar.com | All Things Guitar.