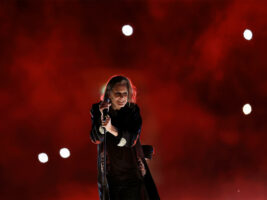 Ozzy Osbourne has set a date for his return to live shows following a four-year break due to his ongoing health issues.

The Black Sabbath frontman told Forbes in a new interview that he has already set plans for his return to the stage next year. In a response to a question about his current health, Ozzy proclaimed, “On the road is where it all happens for me. Some nights I’m good, some nights I’m not so good. I’m getting slowly better and I don’t give a fuck if I have to crawl on the stage I will get back on that stage very soon.”
“The date I’m putting in the books is May of next year. I’m going to get well by May. I’ve got to set myself a date.”
The metal legend also discussed the recovery process he has undergone, reminiscing on the fall he took in 2019 that spurred his hiatus from live shows. “At the time I was thinking, ‘Nobody could work, so at least I’m not on my own.’ I couldn’t work, neither could no one else. So I thought, ‘I’ll recuperate pre-tour, I’ll be okay,’” Osbourne shared.
“But I’m still fucking suffering now. Not as badly as I was by any means,” he said, adding that he struggled with balance and stability. “It’s fucking scientific now,” Ozzy said of the procedures and bionics he works with today: “But now I’m working out with these new apparatuses, proving to be okay and I’m dying to get back on the stage.”
Osbourne has previously discussed how his lack of mobility might further delay his return to the stage. “The thing is, my head is all right. My creativity is OK. My singing is OK… but I just can’t fucking walk much now.” he said: “It is so fucking tough because, I mean, I want to be out there. I want to be doing it.”
Osbourne’s latest album Patient Number 9 was released in September and features a host of rock’s biggest names including Guns N’ Roses’ Duff McKagan, Black Sabbath bandmate Tony Iommi and, most notably, the late Foo Fighters drummer, Taylor Hawkins.
The post Ozzy Osbourne sets date for return to live shows after four-year break due to health issues appeared first on Guitar.com | All Things Guitar.