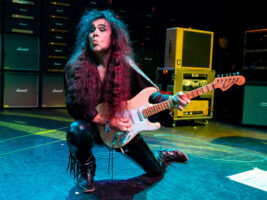 What’s on Yngwie Malmsteen’s board these days? A lot of Boss pedals

Yngwie Malmsteen has given fans a small tour of the pedalboard he’s been taking with him on tour in a new video uploaded to his Youtube channel.

The virtuoso’s setup features a smorgasbord of stomp boxes, most routing to a Boss ES-8 Effects Switching System, which he lovingly decked out in Ferrari stickers.
The first pedal in the chain is a wonderfully classic Dunlop Cry Baby wah pedal, connecting from his guitar via a Line 6 wireless system.
The Boss switcher follows that, and it loops in a Boss CE-2w Waza Craft Chorus, Boss DD-3 Digital Delay, Boss NS-2 Noise Suppressor, as well as an MXR Dyna-Comp and his signature Fender Yngwie Malmsteen Overdrive Pedal.
Stepping out of the switcher, there’s a Digitech Whammy for pitch-shifting fun and a Boss RE-20 Space Echo.
In the video, Malmsteen also shows how his patches are set up and demonstrates the nuances – from full-stack roar to squeaky clean – each bring to his sound. Watch Malmsteen’s pedalboard tour here.
The Swedish virtuoso is currently touring in support of his latest album, Parabellum, which dropped in 2021. His next show will be at the Teatro Vorterix in Buenos Aires, Argentina on 19 October – more details about the tour on Malmsteen’s site.
Last month (August 2022) Malmsteen fired back at those who label his shredding as “emotionless” by calling them “tone deaf” in an interview with Guitar World.
“I’m sure there are examples of empty fast notes,” he told the publication. “Those examples do exist.”
“But if you listen to the way I play, and you hear a fast slur or a fast run, a fast arpeggio, or whatever I’m playing, if you slowed that down, it would have full harmonic value along with passion and expression.”
The post What’s on Yngwie Malmsteen’s board these days? A lot of Boss pedals appeared first on Guitar.com | All Things Guitar.