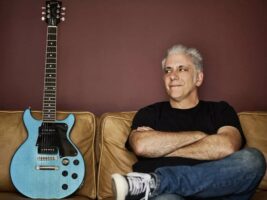 The double-cutaway guitar adopts the aesthetics of Beato’s favourite guitars: his TV Yellow Les Paul Special and his Pelham Blue Les Paul Standard. Its mahogany body is 1.5” thinner than a regular Les Paul Special DC, reducing its weight to a comfortable 7.2 pounds.
The accompanying mahogany neck comes equipped with an Indian rosewood fretboard, 22 medium jumbo frets, acrylic dot inlays, a Graph Tech nut, single-ply cream binding and a specially-designed heel to enable easy access to upper frets.
Credit: Gibson
The guitar’s hardware boasts a Tune-O-Matic bridge with a stopbar tailpiece, vintage deluxe tuners and a black multi-ply pickguard. Electronics come in the form of two P-90 pickups – with individual volume and tone controls – wired to a three-way pickup selector switch.
The signature model’s most head-turning feature is arguably its striking TV Blue Mist nitrocellulose finish, which contributes to the guitar’s modest weight through its use of No Grain Filler. Additionally, Beato’s signature can be seen on the truss rod cover as a subtle form of personalisation.
Credit: Gibson
Beato first teased the guitar in his New Year’s Eve livestream in end-2020, where he admitted to being approached by a representative from Gibson about a possible signature model, and announced his endorsement with the guitar titans. “And I said […] I would like to have a Les Paul Special DC, like my TV Yellow one,” he stated. “ And so I am now a Gibson endorser as of a few weeks ago.”
In April 2021, Beato gave his Instagram followers their first look at the signature axe when he posted pictures of the guitar from Gibson’s assembly line.

As mentioned in his earlier livestream, all proceeds from the guitar’s sales will benefit music charity, Save The Music foundation, who help make music education more widely accessible to public school students in America.
Beato, whose YouTube channel boasts an impressive 3.14 million subscribers, is not the first Gibson endorsee who is not an artist or affiliated with an established act. In 2007, the brand released the KS-336 – a goldtop variant of their now-defunct ES-336 model – as a signature guitar for ‘24’ star Kiefer Sutherland, a noted guitar collector.
Rick Beato’s Les Paul Special DC retails for $1,999. More information can be found on Gibson’s official product page.
The post Rick Beato’s Gibson Les Paul Special: Thinner body, TV blue finish and more appeared first on Guitar.com | All Things Guitar.