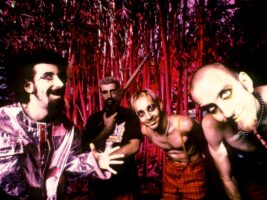 Watch rare 1990s rehearsal footage of System Of A Down

Rare rehearsal footage of System Of A Down has been posted online to YouTube which dates back to 1998.

READ MORE: Sam Fender announces break from touring due to mental health reasons: “My  friends and colleagues have been worried about me for a while”

The footage was posted by a channel under the name of System Of A Down Live Archive. Two videos were posted, with the first one showing the band rehearsing before a show at Bojangles in Sacramento in December 1998. Right at the end of the video, the group receives the news of Snot frontman Lynn Strait’s passing.
The second recording shows the band rehearsing before a gig at the Transmission Theater in San Francisco. Both shows took place roughly six months after System Of A Down released their self-titled album.
You can watch the videos below:

The channel’s owner posted a comment which reads, “I own more than 600 SOAD bootlegs (some of which never seen the light of day) that I’ve collected over the past decade & now I am publishing them all on weekly basis.”
The videos join a multitude of archived footage being unearthed and shared online – rare recordings have also been posted to YouTube of Kiss, Led Zeppelin and The White Stripes.
Back in November 2020, the band broke their 15-year hiatus to release new songs in a bid to raise awareness about “a dire and serious war being perpetrated upon [their] cultural homelands”, as well as funds for the Armenia Fund.
The post Watch rare 1990s rehearsal footage of System Of A Down appeared first on Guitar.com | All Things Guitar.