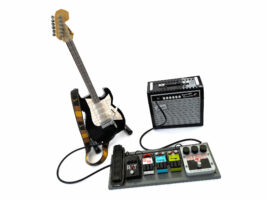 What’s the only thing the Lego Stratocaster was missing? A tiny Lego pedalboard, of course

Earlier this year, Fender teamed up with Lego for a Stratocaster model kit. It allowed you to build your own miniature guitar and amp setup from Lego, however, Lego MOC (My Own Creation) designer Steve Marsh (known online as rubblemaker_lego) found the effects options lacking and so designed his own pedalboard for the kit.

His board features, in order of signal chain, a Big Muff, a Boss PH-1 Phaser, CE-2 Chorus and TU-3 Chromatic Tuner, a ProCo rat and a Dunlop CryBaby wah.
He wrote of the inspiration behind the creation: “I recently bought the LEGO Fender Strat set. It’s a great set but it was sorely lacking something. It came with just one footswitch and, having played guitar and bass in about 25 different bands, I wasn’t going to settle for that. So I decided to make my own effects pedalboard for it.”
The attention to detail is downright astounding, with the pedals all featuring correct power supply and audio jack location, control layouts and relative scale.
Take a look at a gallery of shots of the board below.

Some of Marsh’s other MOC models include recreations of a number of Star Wars and Battlestar Galactica ships, as well as a recreation of ED-209 from RoboCop.
Instructions for the set are available over at rebrickable.com.
The post What’s the only thing the Lego Stratocaster was missing? A tiny Lego pedalboard, of course appeared first on Guitar.com | All Things Guitar.