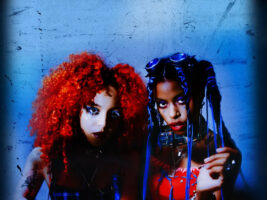 Nova Twins have released their latest single, Antagonist. The track has arrived as a non-album single.

The new track features the band’s signature heavy use of effects, featuring synth-like pitch-shifted distorted bass and guitar. It’s one of the band’s heavier tracks, too, with some screamed vocals peppered throughout.
When we asked Nova Twins in September about new material they said they’d been writing over the lockdown, however, they remained tight-lipped about details of a new album. Right now, Antagonist remains a standalone single.
Take a listen below.

In September, Nova Twins helped launch Fender’s new Player Plus range of guitars. Alongside discussion of gender and racial diversity in the worlds of guitar and heavy music, bassist Georgia South told us about the shifting landscape of bass as a lead instrument. “There used to be that stereotype of, ‘Oh, I don’t want to play bass in the band, but someone’s gotta do it,’” she said. “But now, I feel like bass is becoming cool again. And I’m definitely trying to fly that flag.”
You can check out Antagonist through your streaming platform of choice here.
The post Hear Nova Twins’ heavy new single Antagonist appeared first on Guitar.com | All Things Guitar.