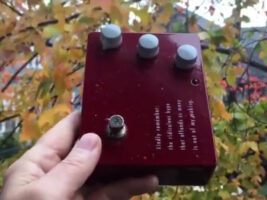 Klon KTR Overdrives should arrive at dealers in “about three weeks”, according to Bill Finnegan

Dealers should have more stock of Klon KTR Overdrive pedals in less than a month, according to an update from Bill Finnegan.

Finnegan, the designer of the legendary Klon Centaur and its production-line successor, the KTR, took to Instagram to update pedal fans on the production status of KTR units. “Hi everyone – sorry for the serious delay with regard to new KTR production, but the light at the end of that tunnel now seems to be getting brighter every day,” he wrote.
“My hope is that a number of authorized Klon KTR dealers will have units in stock in about three weeks.”
The update follows a live stream from Finnegan where he revealed that the next run of KTR overdrives would have different diodes, as he was reaching the end of his stock of NOS diodes. “I’ve tried for [years and years] to find more of those damn things,” Finnegan said in the stream. “I’ve really seemingly exhausted every possibility; I just don’t think there are any more of them out there.”
He then revealed to those watching that they had already heard the new diode: it was in one of the KTR pedals demoed earlier, and Finnegan deliberately avoided pointing out which one.
“If you weren’t able to hear any difference, that’s a good thing. That means I’ve done my work,” he said. “I had to modify the circuit, so there are some modified values […] so that the overall result ends up sounding the same.”
There is no set launch date for the new run of KTR Overdrives, so keep your eyes peeled on dealer sites and on Guitar.com for updates.
The post Klon KTR Overdrives should arrive at dealers in “about three weeks”, according to Bill Finnegan appeared first on Guitar.com | All Things Guitar.