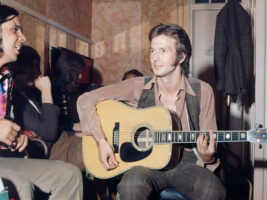 The Martin D-45 played by Eric Clapton at Derek And The Dominos’ debut gig expected to fetch as much as $500,000 at auction

A guitar played by Eric Clapton at the first Derek And The Dominos gig is expected to fetch as much as $500,000 when it goes up for auction next month.

READ MORE: Eric Clapton has paid at least £1,000 to an anti-vaccine music organisation

The guitar is a 1968 Martin D-45 acoustic. It shows some light playwear around the soundhole, but otherwise is in fairly good condition.
It was gifted to Welsh singer Dave Edmunds by Clapton in 1976. The sale includes a letter of provenance signed by Edmunds, stating that Clapton was originally planning to give him a Gibson J-200 but chose the Martin instead when the J-200 couldn’t be found.
The sale also includes a case marked with the words “Eric Clapton Group. Delicate Electronic Instrument. Handle With Care.”
The guitar has been matched to several photographs taken of Clapton in 1969 and 1970, most notably those by Koh Hasebe on 14 June 1970, when the guitar was played at Derek And The Dominos live debut at London’s Lyceum Theatre.
Derek And The Dominos, although a short-lived project, would produce some of Clapton’s best-known work, including Bell Bottom Blues and Layla. The band dissolved in 1971, partway through the production of their second LP, due to tensions within the band and the personal problems of its members.
The current bid for the guitar is $85,000, from a starting bid of $75,000. The estimated final price is between $300,000 and $500,000. See the lot’s details here.
The post The Martin D-45 played by Eric Clapton at Derek And The Dominos’ debut gig expected to fetch as much as $500,000 at auction appeared first on Guitar.com | All Things Guitar.