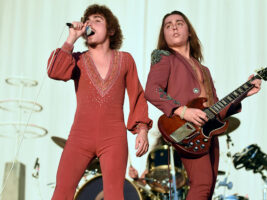 Why does Greta Van Fleet’s music sound so much like Led Zeppelin?

It’s impossible to imagine a world without Led Zeppelin… unless apparently, you’re Greta Van Fleet. From the moment the Grammy-winning four-piece burst on to the scene, the Michigan rockers have drawn heavy comparison with hard rock’s most iconic and influential band. In recent years everyone from NME and Rolling Stone to Ultimate Guitar have noted the striking similarity between Led Zeppelin’s legendary sound and the music GVF began making decades later. Even Robert Plant chimed in, claiming that “they are Led Zeppelin I” in 2017.

But the band themselves have played down that connection, initially only acknowledging Led Zeppelin as one of a host of varied influences that they drew from. That just stoked the fires of online derision from fans and critics alike, who have dismissed the band as ‘rip offs’ of the original, with Pitchfork witheringly dismissing them as a band who “don’t even realize they’re more of an algorithmic fever dream than an actual rock band”.
It’s perhaps not surprising that the band quickly started to bristle at the comparison, with guitarist Jake Kiszka going as far as to sarcastically claim that he’d “never heard of them” when asked about Led Zep in an interview. As you can imagine, that only made the situation worse, and now it’s hard to talk about GVF – who are one of the most popular new guitar bands of recent years – without mentioning the Led Zeppelin rip-off accusations.
But why does Greta Van Fleet’s music sounds so similar to Led Zeppelin? We all know it instinctively, but there must be a reason for that, surely? Well, let’s find out…
Image: Michael Putland / Getty Images
Highway one
Let’s take Highway Tune, GVF’s 2017 breakout hit and still their most popular song – it’s easy to see why, this gritty but polished track is a three-minute slice of remarkably faithful classic rock, but even putting genre aside, there’s something very familiar about it, almost like we’ve heard it before.
Perhaps the most striking similarity is Sam Kiszka’s vocal – the high-pitched wail that opens the track is remarkably Plant-like, and given the two vocalists share a near-four-octave range, perhaps that’s inevitable, but there’s more here.
Back in 1975 Led Zeppelin’s sixth studio LP, Physical Graffiti features a track called, The Rover, a classic Page-driven song that features a memorable gritty bluesy riff. Written in F♯ minor, this riff features a descending minor pentatonic scale figure at the end that sounds very familiar indeed. Flipping back to Highway Tune and we have a very similar pentatonic figure, with the same the same descent and semitone string bends, but raised a semitone in key and switched to a major tonality.
If we look at another of GVF’s biggest hits, Safari Song, we can pick out more sonic similarities. Again, Sam’s Plant-like wail instantly sets the tone, but this time it’s more the folk-meets-rock vibe of Led Zeppelin IV’s classic Rock And Roll that Jake appears to be channelling here, with similar ‘rockabilly’ vibes and the wiry high treble guitar strokes, and the bridge chords on When The Curtain Falls have more than a little in common with the chorus of Ramble On It’s not just the guitar either, if you listen closely to the song Flower Power, you’ll notice the organ fadeout is almost identical to the one on Led Zeppelin Is Your Time is Gonna Come.

Sounds like
But it’s not just about the notes that are being played of course, and it’s hard to miss the remarkable similarity between the tones that Jake Kiska is getting. It’s all the more interesting that his rig sounds so Page-like given that he’s primarily an SG player, when most of Led Zeppelin was recorded with either a Telecaster or Page’s iconic ’59 Les Paul – perhaps their shared affinity for vintage-style Marshalls is the secret ingredient. Whatever it is, the tonal similarity is uncanny, and it’s something replicated elsewhere in the band – Danny Wagner’s Ludwig Vistalite drum kit was John Bonham’s go-to.
But the ultimate question is, does it really matter? It’s not as if Led Zeppelin didn’t heavily draw from their influences when they were writing anyway. When John Paul Jones wrote Black Dog, he couldn’t even remember which of his blues icons he’d cribbed off – initially stating he’d been listening to Muddy Waters when he came up with the riff, before latterly correcting the record that it was actually Howlin’ Wolf.
And it’s not as if GVF are the first band to be compared to Led Zep either. In the 80s, Robert Plant memorably christened Whitesnake frontman David Coverdale as ‘David Cover Version’ such was their perceived similarity in vocal style. Even this year, Eurovision kings Måneskin have been compared to Led Zep among others, though the Italians seem to have accepted those comparisons as a compliment, as opposed to a critique.
Image: Jay Dickman / Getty

When The Curtain Falls vs Ramble On

The third track on GVF’s 2018 album Anthem of the Peaceful Army is hard to miss. You don’t get a more monstrous riff than the beginning. But does it sound familiar? Perhaps it doesn’t appear a carbon copy to Zep’s Ramble On, but the structure stays melodically similar. Based on the pentatonic scale again, as is the result of blues-rock, Kiszka’s riff is a fleshed out, and louder, rendition of Page’s thin rhythmic opening, reportedly played on the lighter sounding Fender Telecaster. Led Zeppelin were known to play around with dynamics quite extensively — it wasn’t missing in Ramble On as John Paul Jones changed between loud and soft as he conversed with Page via crotchets and quavers.
Perhaps GVF take it upon themselves to stick to forte and mezzo forte dynamics, skipping over the loud/soft seesaw often woven into Zeppelin songs. But GVF play classic rock because it’s, in Sam Kiszka’s words, “a lost ideology” (Apple Music, 2018), and who wouldn’t want to play it from the roof if it’s dying? From the jangling rock ‘n’ roll textures to the thrilling shreds, yells and howls, they couldn’t be played on any volume other than full.
Jake Kiszka of Greta Van Fleet. Image: Erika Goldring / Getty Images
Clone saga
And perhaps that’s the key difference that has made Greta Van Fleet such a polarising band – by trying to avoid the obvious comparisons with Led Zeppelin, they’ve made people more conscious of them. It seems on that one, the young Detroit rockers have softened slightly, with Kiska telling FaceCulture, “I think that we’ve become more conscious of it, because I don’t think before we ever really realised, in a lot of senses, the similarities or the commonalities that we share with that group.
“It’s being said over and over, and I think it’s one of the greatest compliments that could ever be given to a young band like ourselves. They’re arguably one of the greatest rock bands of all time, so that is humbling and inspiring and honourable, in that sense.”
The history of popular music wouldn’t exist without people cribbing and borrowing from artists that have gone before, and in that regard Greta Van Fleet are carrying on one of the great traditions of rock ‘n’ roll – there’s nothing to be ashamed of there.
For more features, click here.
The post Why does Greta Van Fleet’s music sound so much like Led Zeppelin? appeared first on Guitar.com | All Things Guitar.