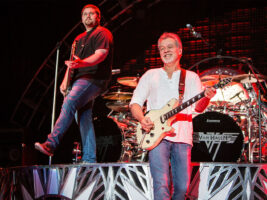 It has been a year since the passing of Eddie Van Halen, and to remember the guitar legend on the first anniversary of his death, his son Wolfgang has penned an open letter on social media.

Eddie Van Halen died on 6 October 2020 from throat cancer at the age of 65. Many, from the guitar community as well as the wider world of entertainment, posted tributes to the guitarist.
“One year. You fought so hard for so long, but you were still taken away. It’s just so unfair,” Wolfgang wrote on Twitter. “I’m not ok. I don’t think I’ll ever be ok. There’s so much I wish I could show you. So many things I wish I could share with you. I wish I could laugh with you again. I wish I could hug you again. I miss you so much it hurts.”
Since Eddie’s passing, Wolfgang, who played bass in the band Van Halen, has stepped away from the group in order to forge his own musical path in Mammoth WVH. The project’s first album features Wolfgang on all instruments.
“I’m trying to do my best here without you, but it’s really fucking hard. I hope you’re still proud,” the musician continued in his letter. “I love you with all of my heart, Pop. Watch over me.”

Last week, Wolfgang joined Guns N’ Roses onstage to perform a rendition of Paradise City. “Wolfgang Van Halen, do you know how cool it is to say that? We’re talking legacy,” frontman Axl Rose said at the concert.
The post Wolfgang Van Halen remembers his father on first anniversary of his death: “I hope you’re still proud” appeared first on Guitar.com | All Things Guitar.