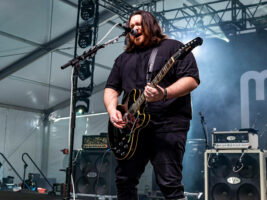 Wolfgang Van Halen has stated that his surname is a double-edged sword, and spoken about how he navigates the expectations created by his father’s legacy.

Speaking to Classic Rock, Wolfgang said his connection to his father Eddie Van Halen is “definitely a blessing and a curse.” He acknowledged how his name has undeniably helped him launch his solo career, saying: “I’m very blessed to have the opportunities that I’m able to just because of my last name.”
However, he stated that although he was given a start, it was up to him to prove he deserved it. “I really don’t think that the last name keeps those doors open for you. If you don’t have the goods to back it up you’re not going to be there for long. So I guess if I disappear in the next year I didn’t have it.:
Elsewhere in the interview, Wolfgang discussed his influences when it came to vocals, as singing lead is the biggest adjustment he has made in the transition to his solo band Mammoth WVH. “Growing up, I was always a big fan of the grunge-era singers, Layne Staley from Alice In Chains being one of my favourites. And I’ve always been a huge Tool fan. I love how Maynard [James Keenan] can have a heavy voice but also the cleanest voice possible.”
Despite this range of influences, he stated: “I’ve never really tried to emulate another singer. I’ve been singing my whole life.”
Mammoth WVH’s self-titled debut record was released in June of this year.
The post Wolfgang Van Halen says his surname is “a blessing and a curse” appeared first on Guitar.com | All Things Guitar.